Back to all posts

Rain or Shine, This Train Keeps on a Rollin'!

It's Friday night and as I sit here thinking about these first two days, I can only get more excited knowing how much better things will get. We played our first show last night in Saddle River, New Jersey. For those of you that don't know about this... Our regular bassist, Mikey Bones, is in the hospital recovering and getting back to his strong self.

Mikey, we love you and I hope this time off will allow for a true healing and recovery.

With Mikey unable to make this tour, I had called my buddy, Steve Pandis. Thankfully, he was able to jump on board with us with only four day's notice! Never really having played many of these songs or arrangements, he crammed everything he could by listening day to day and it all paid off when we made it to the end of the show with little to no mistakes. Steve was on fire and Louis even let him sing a song! You'll have to come to a show to see what he sings next.

What a day!! After the gig, we stocked up on the essentials for our nightly libations and headed back to our hotel. Let me tell you, we stayed up waaayyyy to late!! Hahaha. But, we had a great time.
I can barely remember it, but I know I ordered dinner for everyone that was there. I am pretty sure we all enjoyed it!

The next morning, we spent whatever hours we could regaining our energy and gearing up for the gig we would later play. Looking out my window I could only slightly see the Empire State Building and Freedom Tower. Just yesterday the skies were clear enough to see the Manhattan Skyline. It definitely looked like we would be dealing with a nice downpour later into the day. When three o'clock rolled around we all hopped into the van and set sail for Essex County. When we arrived there was a light drizzle happening. As 7:15pm rolled around, so did the rain clouds... and they began to let loose. The concert goers of Essex County were prepared though. They had their umbrellas and were ready to enjoy some good music.

Half way into the show the rain REALLY started coming down on us and we could notice that the promoter wanted to end the show and let people go home. Louis wasn't ready for that, so we put our battle faces on and faced the storm! Phil, Ted and Louis would run out and blast solos and verses in the rain as it came beating down on their faces and into their horns! The energy of the crowd suddenly started to come up by leaps and bounds. We could all feel an intensity and fun atmosphere building for both the band and the audience. By the last two songs we had people jumping up and down with us in the rain singing, tossing their umbrellas aside and just letting loose!

We then marched our horn section with Louis and Sarah out into the rain and played with the audience in the big wet grass field. Buckets of rain continued to pour down and nothing could stop our band tonight. As we marched back up on stage to finish the show, we looked out into the field and saw some of the happiest people you'd ever see in the rain. Smiles and excitement spread across the big grass field as people gathered around the stage. The people were elated to see such a performance.

You see, we're on a mission. A mission to make people happy and enjoy the most out of those 90 minutes that they get to spend with us. I feel that this day will be talked about for years to come... "That rainy day that The Witnesses kept playing through the pouring rain and marched out onto the wet grassy field and partied with the audience to the very last note!"

Can you believe we're only on our second show of the tour?
It's only going to get better from here. Thanks for tuning in!

Until next time... Stay dry or soaked.
But whatever you do, just have fun!

Below: Louis Prima Jr signals to the audience that this rain is just the beginning of the REAL show. 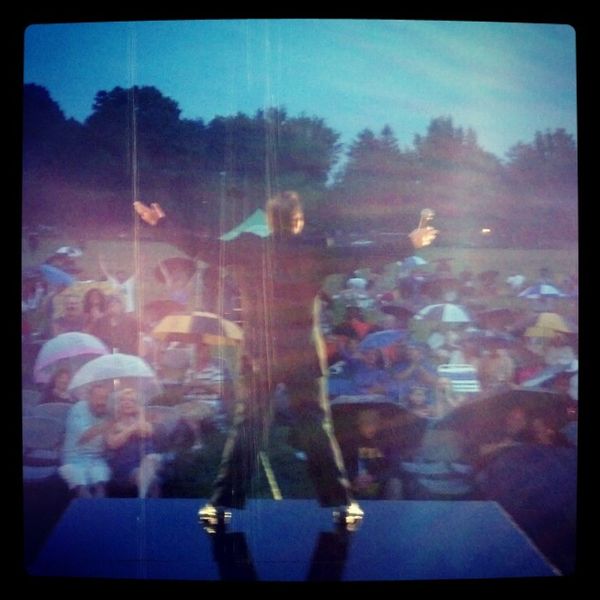